After several years  I have finally managed to put together a Sinar 5x4 system through buying various second hand gear  in bits and pieces as they became available at Photon Photography's eBay store and when I had some spare cash.   It is possible  to do this  because Sinar's  standardized components were carefully designed to form a highly versatile,  modular camera system.

I had started off acquiring a  5x4 Sinar f1  several years ago from Alex Garde in Tasmania, who was moving up to 11x14 for his wet plate photography, as I  wanted  do some black and white photography.  The f1 came with  a standard bellows,  two lenses (150mm normal and 75mm wide-angle), a rail clamp,  a standard rail,  and  a Sinar tripod head. In order to use the  Schneider-Kreuznach  Super-Angulon 75mm f5.6  I had to acquire a wide angle bellows, a lens hood and a yellow filter.   I then  bought  a Sirui R 4123X carbon fibre tripod. All I  need now is a case to transport  it to a location in the field. One is on hold  for me at a Hindmarsh  disposal store in Adelaide. 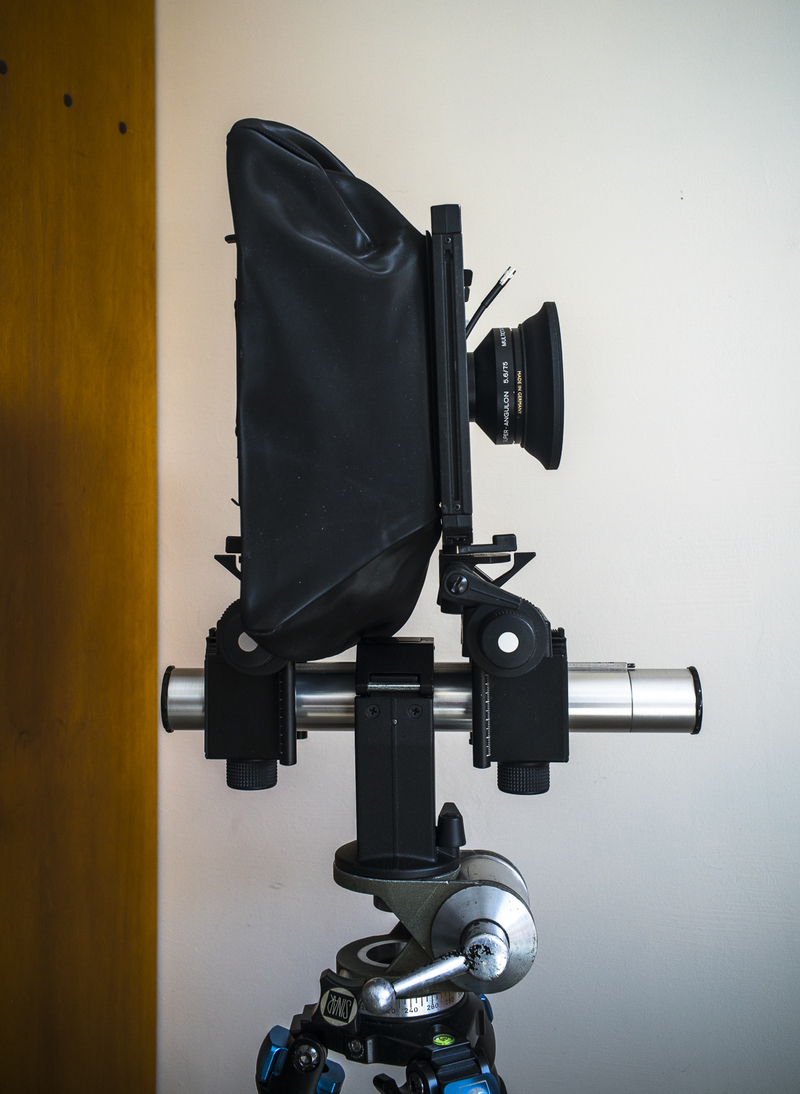 The f1 is a monorail that is designed to  be used  for  film photography outside the studio. The f stands for field.  It  is a  basic,   lo fi,   light weight 5x4 system--its really a light-tight box--- that  can be easily carried in the field.  My f1 is  without either a  light-metering back or the digital lenses. I  have no need as I do the metering  with a hand held meter,  and I manually adjust the aperture and the length of exposure.  It is the latter  f3 Sinar that  is a digital/analog model,  which  supports a variety of Sinar digital lenses and digital backs.

I have no interest in using a digital back on a view camera in the field. Mine is a hybrid workflow,  meaning  that everything from the camera to the developing of negatives is  analog, whilst  the final processing, including the print is within the digital workflow.
A  standard 5x4  bellows  and the Rodenstock Sironar  150mm f5.6 lens was left over after the f1 was operational.  I  decided to acquire  the modular parts to  build a Sinar p2  Acquiring the modular parts (rear and front bearers, rear and front standards,  focusing screen, rail clamp,  standard rail,  bellows lens hood, yellow filter)  bit by bit  from the UK was done over  several years.
The p2 is a precision instrument, the gearing is  easily damaged with rough handling,  and it is heavy,  since   it is really a studio camera. In the field, when used with the sturdy  Gitzo aluminium tripod, it    is  pretty much limited to being used  a few metres from a car to do architectural photography or urban studies.   A  padded wooden carrying case is currently being built for it  by Lars Heldmann. 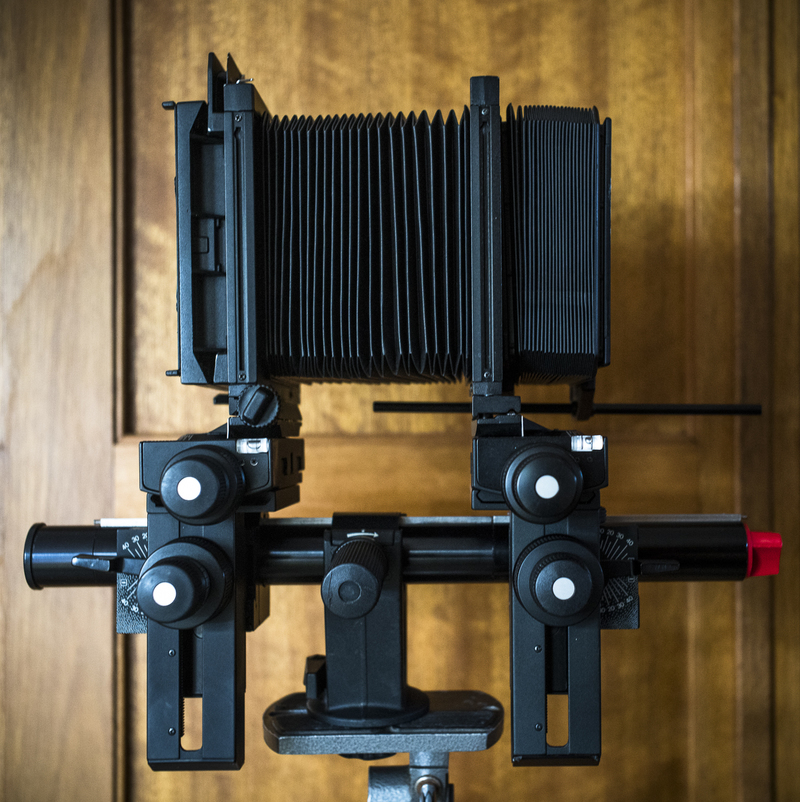 All the above parts  were bought  second hand,  as the Sinar  p2  is no longer manufactured--this  appears to have stopped  around 2010.  The Sinar p  emerged in 1984 and  it was  then seen as  the Rolls Royce among large format cameras.   It was high tech for a monorail  and hellishly expensive.  The contemporary  Sinar is the  Sinar p3-df, which allows you to use digital backs or a digital DSLR camera attached to the back.  Though the  p2 can be converted into the  p3-df I have no interest in upgrading.  There is no need to upgrade as there is virtually no modern technology in a monorail. 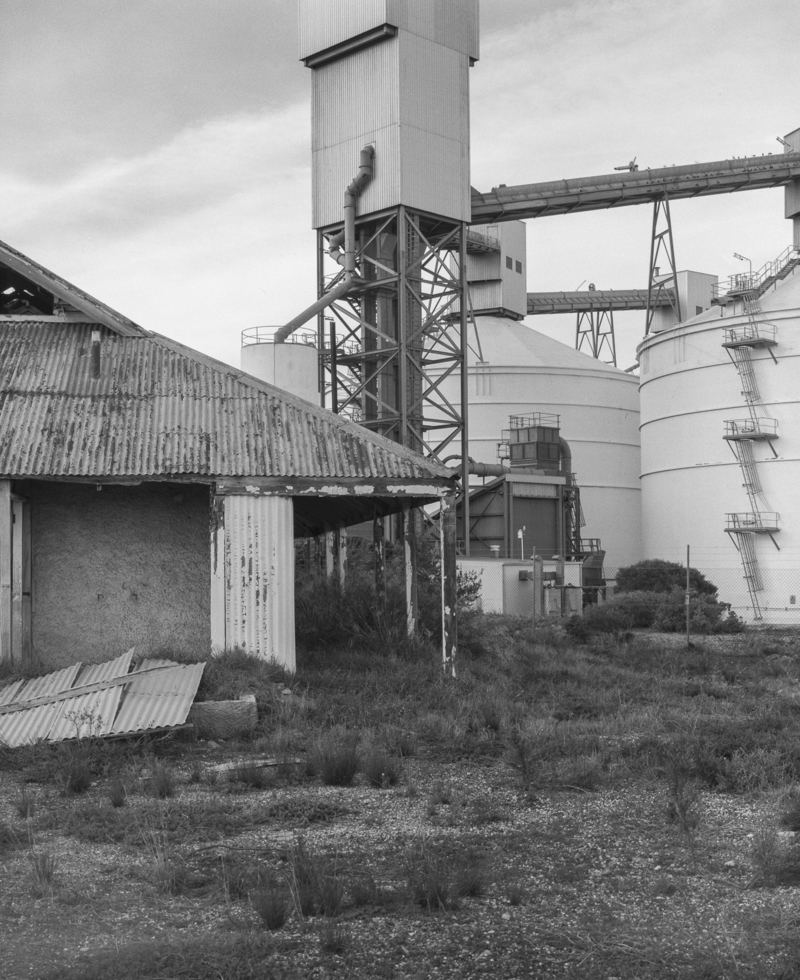 Sinar has been  owned by Leica since 2006, when Leica  acquired a 51% stake in Sinar from Jenoptik. Leica then  took Sinar over in 2013, before  integrating Sinar into the Leitz group in 2018. Though I  have no real idea where they are going with  this integration, my guess  is that it allows  Leica to use its Leica S3 camera and lenses with a  modular Sinar p3-df view camera. To buy into  this  kind of  high end photographic gear requires a major investment that is equivalent to buying  a new car.

I often wonder how many large format camera manufacturers are  still in business now that  digital  has become the norm. Gandolfi has gone as has Ebony and Horseman.   It appears that  Cambo,  Alpha,  Arca Swiss,  Linhof,  and Toyo still in business making cameras --though  they must be finding it tough going  with the emergence of increasingly affordable  medium format digital cameras? How long can they hang on?  In the large format world  Gibellini  and Stenopeika are  new, are purely analogue, and they are  surprisingly successful. It also seems that  4x5 field cameras continue to be popular --eg., Wista + Chamonix amongst others-- as you can back pack them whilst on a bushwalk.  It seems that  Walker Cameras have gone.
Though  large format  photography is  a niche market,  this kind of  slow photography is  alive and well.