My online research has indicated that the Ngarrindjeri bore the brunt of frontier European violence before and after the formal occupation of South Australia in 1836,  which  was premised on dispossession of its Aboriginal population of their land.  Women were kidnapped by bands of sealers operating from Kangaroo Island and the coastal camps in South Australia; the Ngarrindjeri people were attacked by men overlanding sheep and cattle to Adelaide; and when settlers  occupied the land to pasture their sheep, many used poison and guns to protect their assets.

I've been searching and scoping for Fleurieuscapes 2, which is  the  significant  historical sites of the Fleurieu Peninsula from the vantage point  of the traditional owners (both the Ramindjeri and the Ngarrindjeri) It is an exercise in historical remembrance in  post-colonial Australia. What I scoped was the site of the whaling station run by Captain Blenkinsop at the  scruffy and run down tourist precinct of Granite Island: 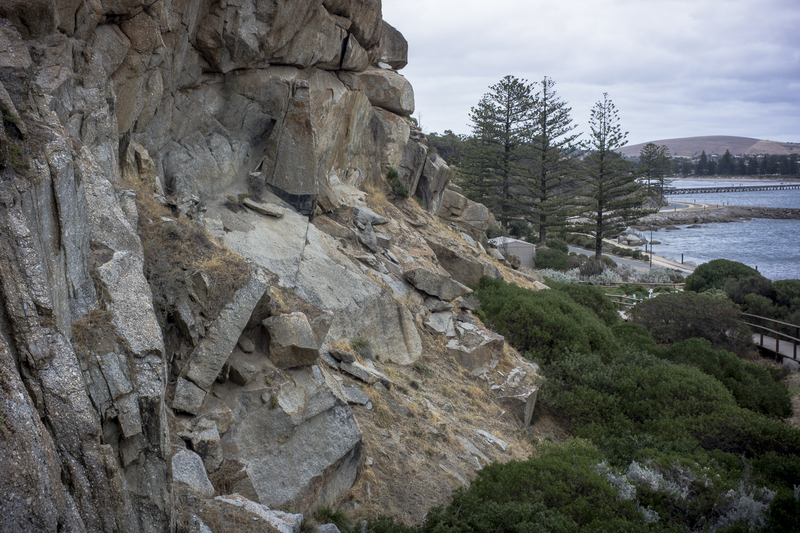 The whaling site  was hard to find,  as there were no  obvious historical signs marking the location.  The  tourist signs were all about the wild life and  the walks.   So I had to figure out where the best  protected site for whaling  would be approximately, then hunt around for any historical markers in the vicinity.

The only  historical sign I could find was an old anchor stuck in the ground. There was a similar anchor was at the whaling site at Rosetta Head, so I presumed this marked the spot. I took a number of scoping pictures. 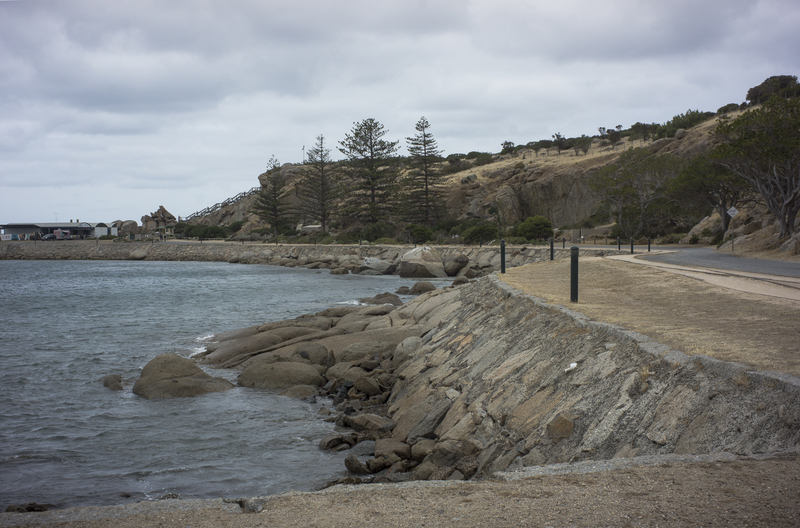 The lack of historical markers puzzled me. It  is almost as if the city council was embarrassed by this industry and the way that the whalers wiped  out the southern right whales and/or  exploited the Ramindjeri people.

We do need to come to terms with the fact that the killing of Aboriginal people was intrinsic to the founding of the Australian nation.The next historical site is that associated with the 1840  killing of the survivors of the   brigantine Maria  by the Ngarrindjeri. The survivors  had been attempting to walk to safety at Encounter Bay along the overlanders' track.  This event led to a punitive police expedition and the hanging of two Aboriginal men and shooting of at least two others in ugly and highly controversial circumstances. The police expedition aimed at inflicting the maximum amount of fear into the Ngarrindjeri  and  it included Inspector Tolmer and Commissioner O'Halloran.

Their aim was to punish the culprits by hanging three of the ring leaders. In the round up of the guilty, three aboriginal men were killed and an unknown number wounded trying to run away. A further two were tried by court martial and hung on the spot with instructions that their bodies were to be left hanging to rot on makeshift tree gibbets over the graves of the first victims. A third guilty man managed to escape this fate by swimming across the Coorong Reach after slipping away from his captors.

The location is north of Salt Creek. The closest one can pinpoint the location comes from reports of where the killings took place. The main site was known as The Yards or Fosters Bight and is located opposite the present township of Meningie, twenty-five miles in from the Murray Mouth. O'Halloran describes the location as opposite the first island of the SE branch of Lake Alexandrina about five miles NNW of the lake shore.

This kind of violence, and  the frontier wars more generally, were essential in subduing violent resistance to British invasion of Aboriginal land. They also paved the way for key economic drivers such as pastoralism. This contrasts with the settler narrative that  the only war was the one that was waged on nature and the elements.  The wars that ensured the foundations of imperialism and colonisation tare  central to Australia’s origins and identity.