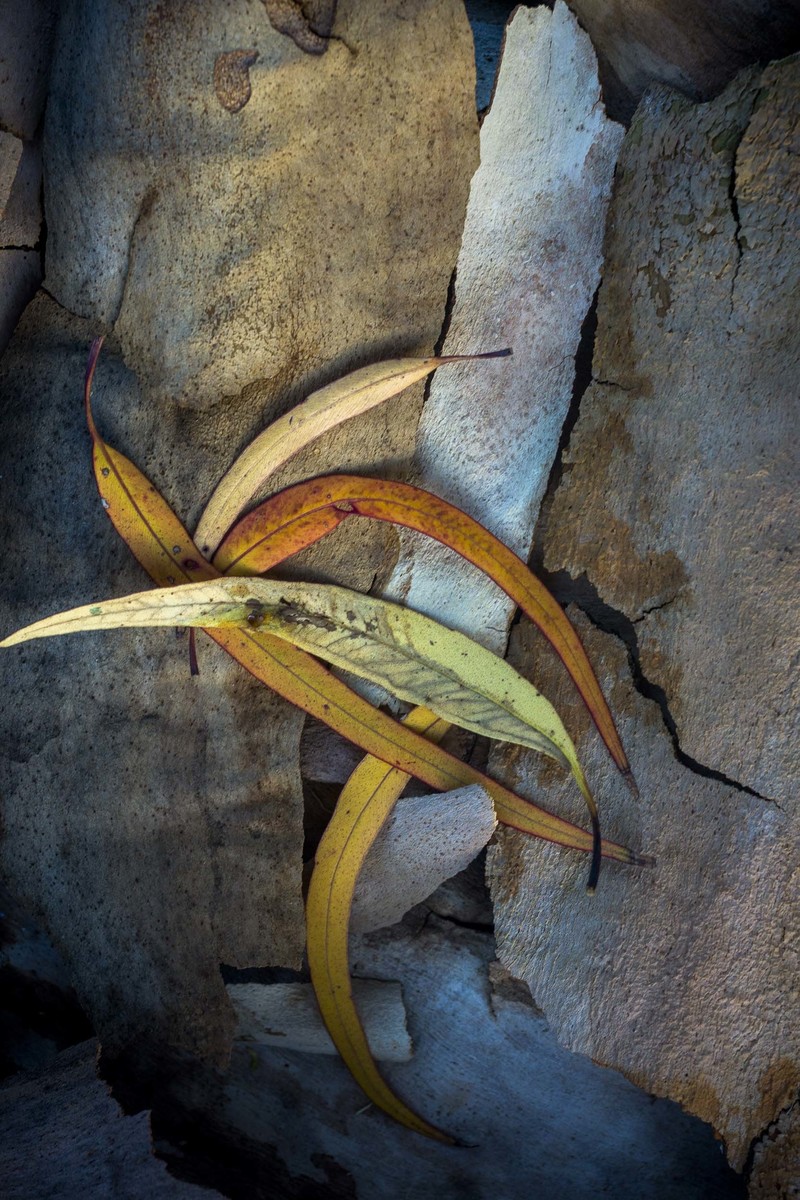 I have been using the few occasions when  I go up Rosetta Head on an early morning Sunday poodlewalk with Kayla to photograph seascapes. That is what you see: the southern ocean.

I am discovering that my  emphasis is on the clouds rather than the sea: 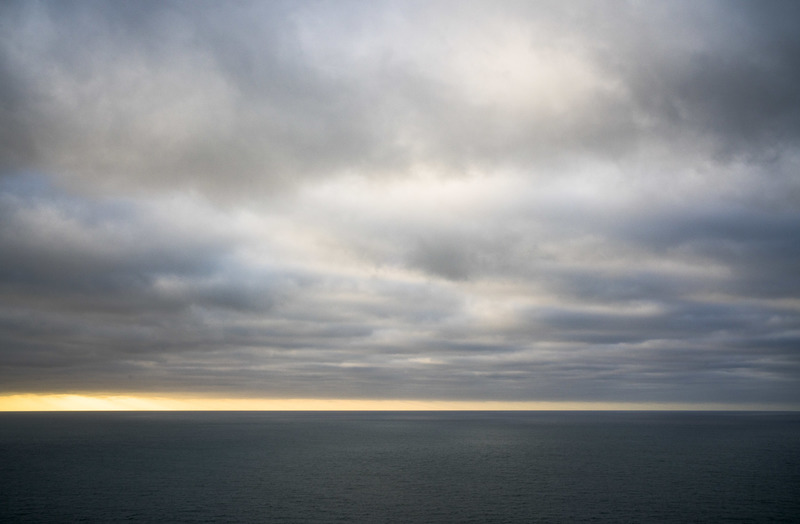 I have tried a different compositional approach  ---eg., one that is more evenly balanced between cloud and sea and neither dominate the other. 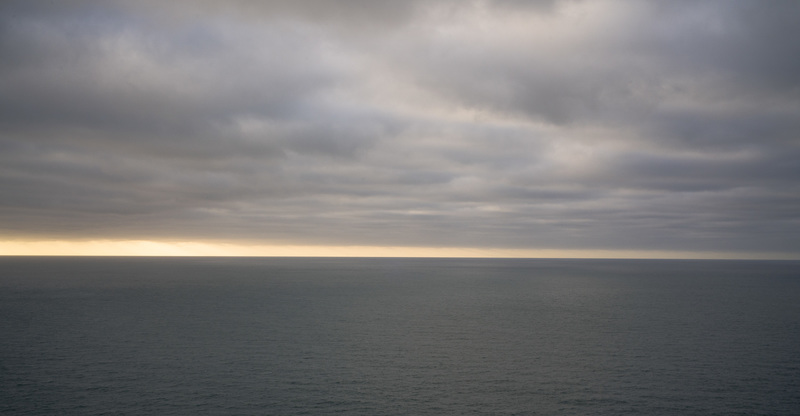 However,  I find the latter  composition more bland and  boring. Boring, tired, done is my  immediate response. And they don't look like abstractions. But they promise possibilities.

During these  days of the Covid-19 lockdown I often see solitary  figures  walking along the  Encounter Bay beach before sunrise. People are  out and about walking from about an hour before sunrise, which in late autumn is  around 7am Central Australian time. 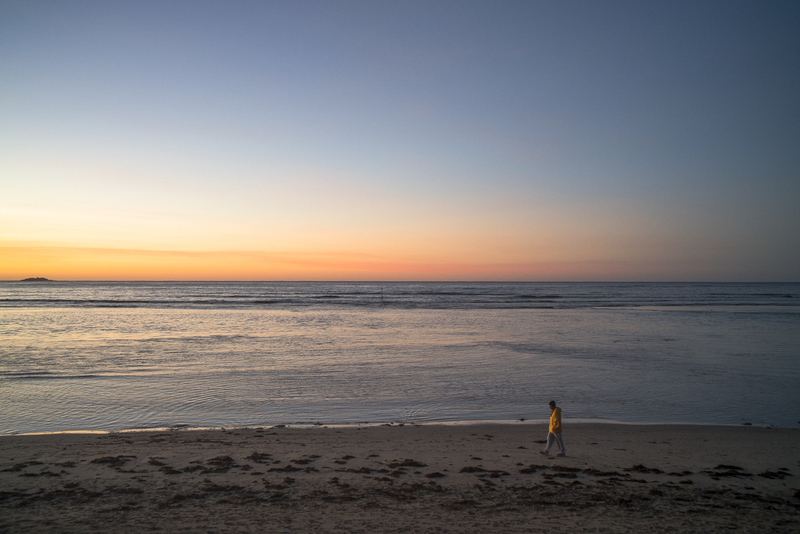 These early morning walkers  do keep to the social distancing measures when they meet others during what is known as the “recovery period”--the  easing of the lockdown measures. these are  now being  coded as a "snap back" to economic growth with a publicly subsidised gas-led recovery.    Business-as-usual.

This concern with ensuring social distancing  is in contrast  to  many in the local shopping centres during the day who act as if the pandemic  is all over,  and that life is now back to normal. They assume that  because the infections are going down, then the pandemic  is over. They do not act as if there is a possibility of  a second wave coming due to increasing community transmission of the virus from the easing of the lockdown restrictions to 'get the economy moving' and people back in work. It appears that people's resolve to keep to social distancing outside the home is weakening.

The Mallee Routes project is on hold during  the public health lockdown to stop the spread of  the Covid-19 virus amongst the Australia population. The  public health social restrictions  during lockdown  require  that we can only travel within our postcode for exercise.  There may be some lifting of restrictions in a week or so by the federal and state governments,  as the former is anxious to get the economy moving.

So I have started to explore photographing the period of lockdown, self-isolation and social distancing;  as distinct from continuing to make various types of locally based  photos during the lockdown; or making film photos  for an online exhibition of film photos made during the lockdown  being organized by  the Friends of Photography Group (FOPG). Photographing the period of lockdown is  about our  experiences of lockdown.  This is a unique time  and photography can, and should be,  a part of pausing  and reflecting  upon our relationship with our surroundings. 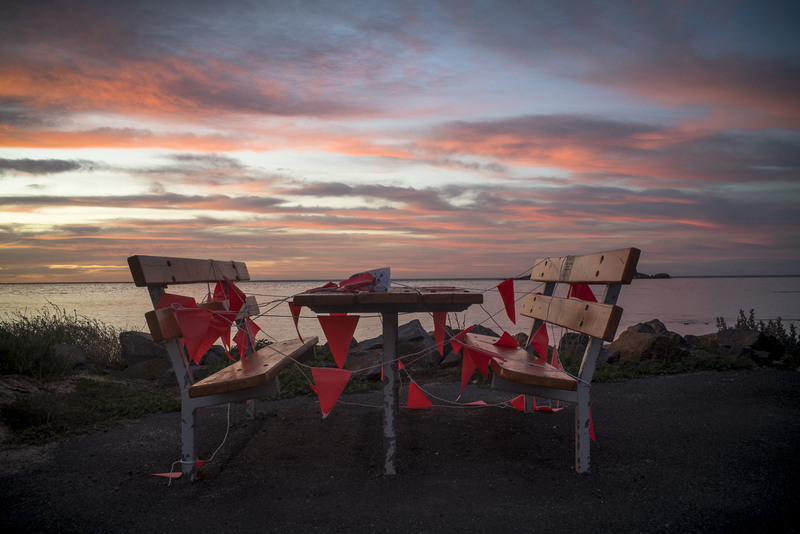 The exploration is experimental in that there has been a  shift away from a conventional documentary approach. This  means that  I am    stepping outside my comfort zone. I have been thinking about photographing  in a more controlled way by working wth people in a set up situation in specific locations.  As I do not have a treasure trove or storehouse of props to use  in these situations,  my  approach  will need  to be very  simple.

This picture was made on  an early morning poodle walk with Ari. The autumn mornings have been very still, gentle  and calm. 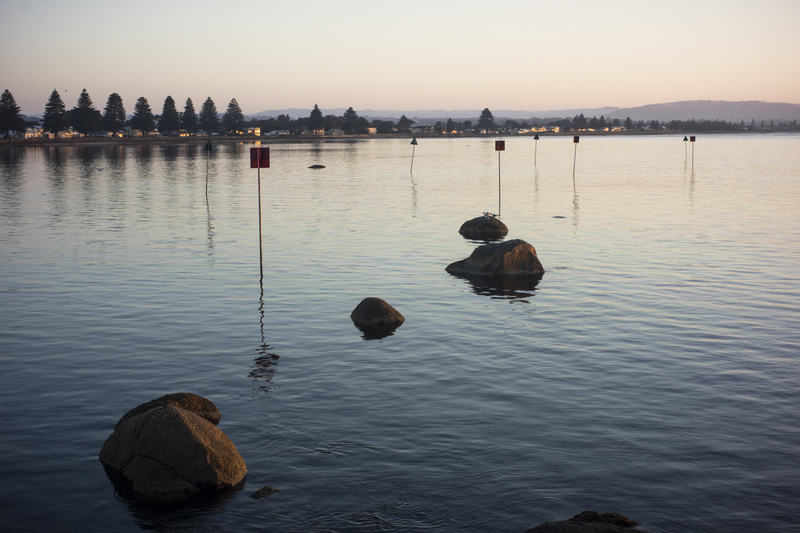 I have been spending my days sitting at the computer at Encounter Studio trying to sequence the photos  in The Bowden Archives book.  I take a break by starting to select images  for  the next book--Tasmanian Elegies.

I've started  to research what happened to the Ramindjeri people, the traditional owners of the land,  after the conquest of their lands and British settlement of  the Fleurieu Peninsula. The settler history is a narrative of  from pioneer port to seaside resort' and this narrative is premised on the the ‘great Australian silence’ in regard to Indigenous people and their history.

The research is  for the second historical  part of Fleurieuscapes project.  The art historical context of the project is that Australian arts practice abandoned the landscape in the 1960’s at the end of Modernism, the last major figures being Williams, Nolan and Olsen as arts practice entered post modernity and deconstruction. Whilst there are notable exceptions (Storrier, Robinson etc.), landscape representation was left to Aboriginal peoples as Aboriginal painting emerged from the deserts of Central Australia.

The second  part of the Fleuriescapes project looks at the  significant  historical sites of the Fleurieu Peninsula from the vantage point  of the traditional owners (both the Ramindjeri and the Ngarrindjeri) in  a post-colonial Australia. This history is one where many of the traditional people living on the Fleurieu Peninsula and along the Corrong  were massacred. Those who survived had the power to govern their lives removed, as well as their connections to the land and the space, and as well as their language to articulate their view of what had happened to them.

The picture below is of the site of an old sealing/whaling station at Encounter Bay, Victor Harbor  that preceded British settlement. The contact  is circa 1830's,  and one of the prime reason  for the Europeans to make contact with aboriginal people was to seek women. Eventually,  some of the Ramindjeri men and women  worked as harpooners and whale spotters. 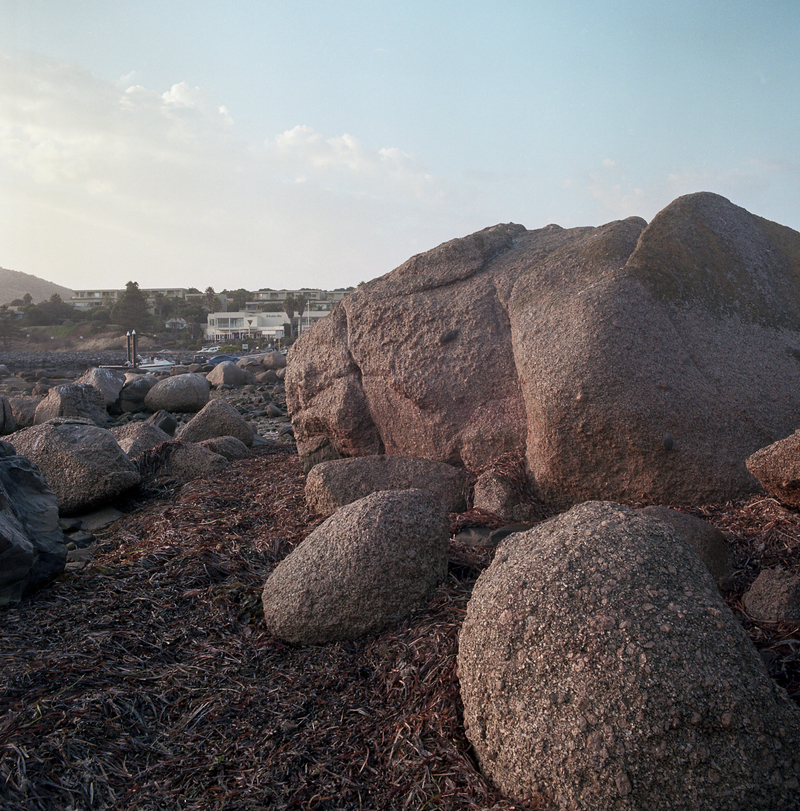 There was another  sealing/whaling station at  Granite Island in Victor Harbor  Many of the Ramindjeri people succumbed to the small pox epidemic which swept the area in the 1830s and then to general disease.  In 1872 the whaling industry, which had started on Kangaroo Island around 1806,  and which produced whale oil  and bones for export,  closed down due to a lack of Southern Right whales.

The weather has been stormy along the southern coast of the Fleurieu Peninsula these last few days. So I have sat on the rocks on the edge of the boat ramp at Encounter Bay, Victor Harbor with a digital camera making abstract photos of the water. 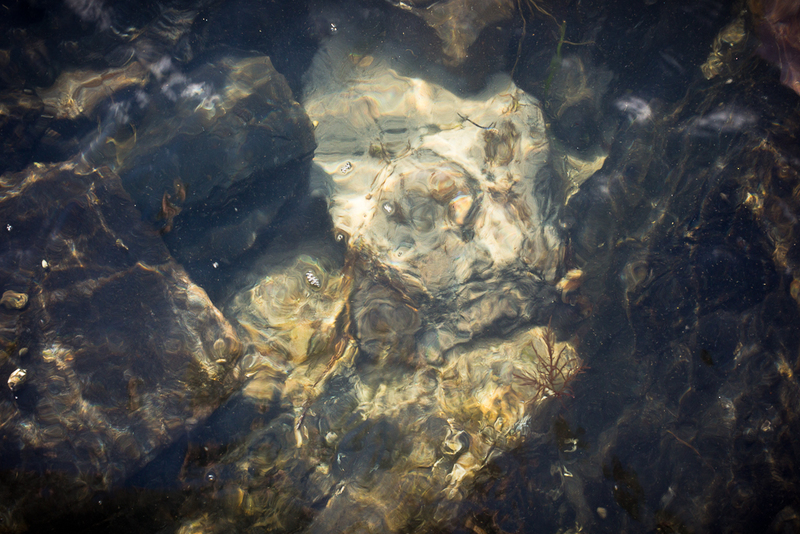 I've done this before and I wanted to experiment with no sunlight and the early morning sunlight. Looking at the uploaded  images on the computer screen afterwards I can see that sunlight works  best.  The lack of sunlight makes the image very drab and flat.

I've started   a little series  of sea abstractions in the form of a DIY book.

The stormy weather finally has gone from Victor Harbor.   Today started  with a glorious spring morning--crisp, clear and still.  As there  was no early morning  cloud cover,  so the 8x10 black and white shoot that I had in mind was  a nonstarter.  I needed soft or diffused early morning light for the shoot.

So I took a walk along the boat ramp  near Whalers Inn  Resort at sunrise in order to  photograph the  sea at the edge of breakwater in Encounter Bay.  I had some abstractions in mind,  which I wanted to explore in the early morning light: 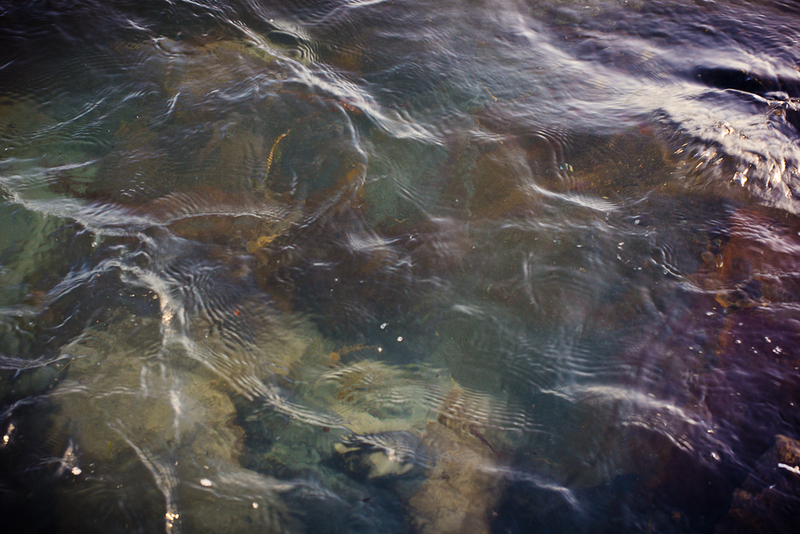 The sea is gentle in this part of Encounter Bay,  and so I was able to sit on the rocks at the water's edge without worrying that I'd be swamped  by every  seventh  wave.  I didn't have that much time  before the sunlight became too bright and the highlights on the white caps of the waves blew out.

This is beachside villa is another example of the old style seaside architecture at Victor Harbor at Encounter Bay. 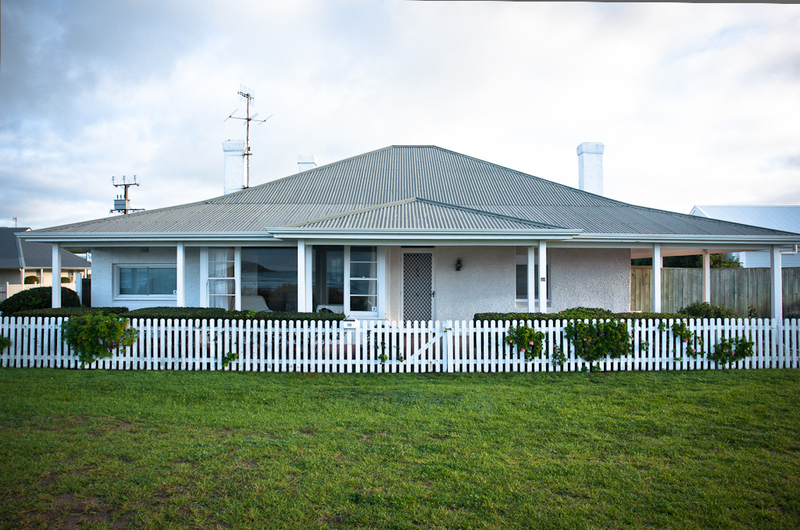 It  ought to be heritage and preserved from the developers who would pulll it down to build a block of apartments or several townhouses.  It's a premium location as it is on the waterfront.